My Dad was recently going through some old boxes and found some buried treasure in the form of an old unused account book that we believe belonged to David Capener Hanks (son of Ephraim Knowlton Hanks and Jane Maria Capener). Inside the front cover of this book were several old letters, one of which I have scanned in and present below. The letter is addressed to C. D. Hanks, of Tetonia, Idaho (I'm not sure why it's 'C.D.' and not 'D.C.', perhaps a 'typo'): 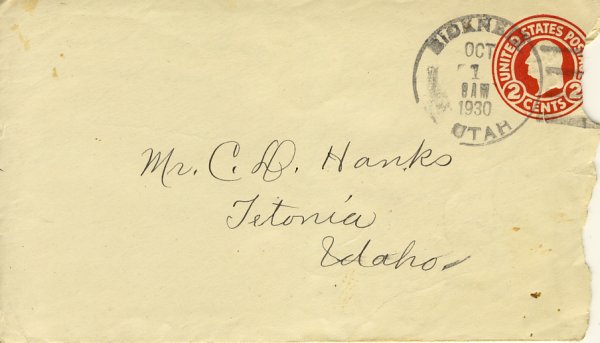 The author of the letter is informing David of some of the events preceeding the death of David's step-brother, Walter Ernest Hanks. Walter was a son of Eph and Thisbe Quilley Read. The letter is dated 30 Sept, 1930. Walter died 17 Sept, 1930. 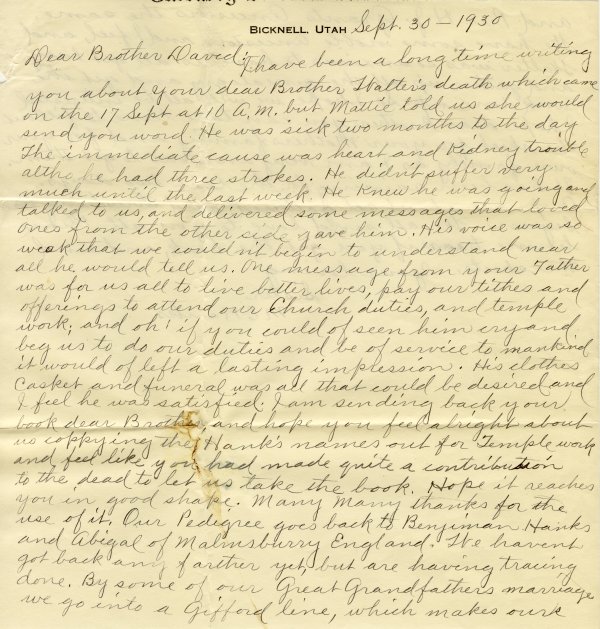 And the back side of the letter: 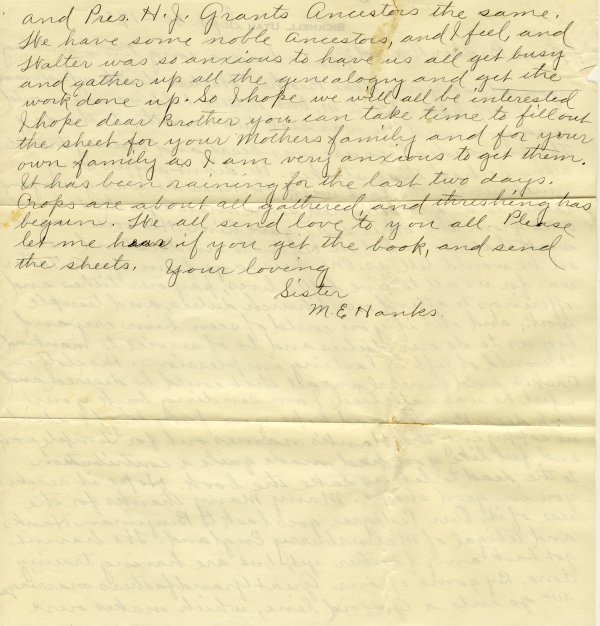 My transcription of the letter:

I have been a long time writing you about your dear Brother Walter's death which came on the 7 Sept at 10 A.M. but Mattie told us she would send you word. He was sick two months to the day. The immediate cause was heart and kidney trouble altho he had three strokes. He didn't suffer very much until the last week. He knew he was going and talked to us, and delivered some messages that loved ones from the other side gave him. His voice was so weak that we couldn't begin to understand near all he would tell us. One message from your Father was for us all to live better lives, pay out tithes and offerings to attend our Church duties, and temple work; and oh: if you could of seen him cry and beg us to do our duties and be of service to mankind it would of left a lasting impression. His clothes Casket and funeral was all that could be desired and I feel he was satisfied. I am sending back your book dear Brother, and hope you feel alright about us coppying the Hank's names out for Temple work and feel like you had made quite a contribution to the dead to let us take the book. Hope it reaches you in good shape. Many Many thanks for the use of it. Our Pedigree goes back to Benjamin Hanks and Abigal of Malmsburry England. We haven't got back any farther yet, but are having tracing done. By some of our Great Grandfathers marriage we go into a Gifford line, which makes ours and Pres. H.J. Grants Ancestors the same. We have some noble ancestors, and I feel, and Walter was so anxious to have us all get busy and gather up all the genealogy and get the work done up. So I hope we will all be interested I hope dear Brother you can take time to fill out the sheet for your Mothers family and for your own family as I am very anxious to get them. It has been raining for the last two days. Crops are about all gathered, and threshing has begun. We all send love to you all. Please let me hear if you get the book, and send the sheets.

If you hail from Walter and Mary Ellen's descendants, I'd love to hear from you.

I think the moral to this story is that you too may have 'buried treasure' hidden somewhere among your posessions. Do you have boxes of old family letters? Old journals? Scrap books? Old photos? If you have access to a scanner or a digital camera, make copies and drop me an email. I'd love to post it here. Bring them along to the Ephraim Hanks reunion this summer, and share them. These really are priceless treasures. Let's bring them out of the darkness and into the light.

Comments
On 05 June 2006 16:58 Lynn Williams wrote:
Can you tell me who "Mattie" was-- referred to in the letter as one who was to get word to David about his half-brother's death (Walter). Thank you!
On 24 July 2006 10:28 Linda Hale wrote:
Mary Ellen Stewart Hanks was my Great-Grandmother. My mother Mary Ellen Hanks Potter was named after her. She was a great woman of faith.